CALMAC FERRIES: SOLD DOWN THE RIVER?

CalMac ferry workers - members of the Rail, Maritime and Transport workers' union (RMT) - are taking industrial action in defence of their pensions, jobs, conditions of work - and against privatisation by the Scottish government, who seem set to hand the publicly-owned CalMac ferries over to the private, profiteering Serco.

They start with an overtime ban, followed by a 24-hour strike.

The workers run lifeline services to remote communities on the Clyde and Hebrides CalMac ferries. 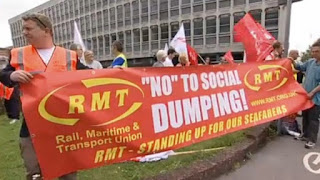 These RMT members deserve and need the solidarity of every worker in Scotland.
They are themselves often members of the island communities who depend on these lifeline services. They are dedicated and hardworking, going out in all weather, and have only resorted to this action because of the threat to the services they provide as well as the jobs and conditions they've gained through collective union efforts.

They decided on this course of action by sweeping majorities in a ballot of RMT members, who make up about 680 of the 1,400-strong workforce. In a decisive 60% turnout, on a two-question ballot, 98% of them voted in favour of industrial action short of strike action, and 92% in favour of strikes. Even if the Tories' vicious hurdles against the right of workers to withdraw their labour had already been made law, there would still be a legal majority for the action!
That in itself illustrates the strength of feeling of a workforce that has tried every other option to get guarantees on their pensions and against compulsory redundancies.

They feel they are pawns in a completely unnecessary exercise by the Scottish government, who say they are obliged to put the contract out to tender under European Union rules.
As the RMT rightly say, it appears the SNP government hasn't even tried to challenge these EU regulations, let alone confront them head-on in defence of the vital public services these ferries provide to the island communities, or in defence of the workforce. So much for 'a strong voice for Scotland'! 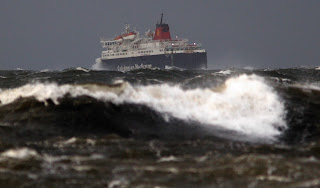 And the same SNP government, for all its talk of 'standing up for Scotland', has form.
Back in May 2012, the Northern Isles ferry service was privatized by the Scottish government, who handed the £350m contract to private company Serco, in preference to the bid by public sector CalMac. 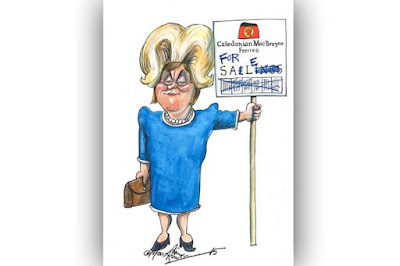 Now, the Shetland Times has revealed that CalMac's tender, which was believed to be cheaper than Serco's, was returned unopened by Transport Scotland, an arm of the Scottish government!
The SNP government boosted the public subsidy to Serco by about £40m, a 20% increase.
The Serco contract led to redundancies, and a threat to workers' pensions, which was only withdrawn after RMT members voted overwhelmingly to strike.

Now the £1billion contract for Clyde and Hebrides CalMac ferries has been put out to tender by the same government - seeking a contract for eight years from October 2016.

The RMT and the other ferry unions are deeply concerned, and suspicious that this amounts to plans to privatize that ferry service too - but with the announcement delayed until after the May 2016 Scottish elections! A cynical attempt at backdoor privatisation, behind the backs of voters.
And workers' conditions are again threatened, which has provoked the RMT members' strikes. 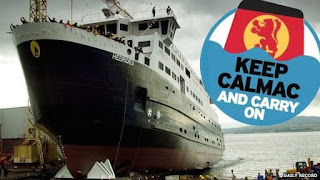 Three weeks ago, I spoke to an RMT member with the Clyde and Hebrides ferries about the issues at stake.

"Since last December we've had meetings of the STUC and the four trade unions involved - RMT, Unite, Nautilus and TSSA - with the government and sought guarantees on job security, conditions of service and pensions off the companies tendering for the Clyde and Hebrides ferry service.

"We thought we'd reached an agreement we could live with, but then we were told the Scottish government would only underwrite our pensions if the Pension scheme was reformed by the end 2015.

"We had written to CalMac earlier, insisting on written guarantees on job security through no compulsory redundancies, defence of conditions and no change to the pensions without union agreement. They gave no guarantees, and on the back of that we met with Keith Brown and Derek Mackay from the Scottish government - we are meeting them again this week.

"We will be telling them the demands on us are totally unacceptable.

"One big issue is pensions. They've given us only 6 months to reform the pension scheme. And the reforms they are demanding are that our contributions increase from 6% to 9.5%; that the pension is tied to the state retirement age, meaning we could be working until we're 68; and that it is downgraded from a Final Salary to a Career Average scheme. So we're being asked to pay more, work longer, and get less when we retire!

"Against our better judgement, the CalMac ferries were put out to tender. The government hoped for at least five companies bidding for the tender, but nobody is interested because there's a clawback of some of the profits to the government. So the only two companies tendering are CalMac and Serco.

"We don't think Serco are fit to bid for a public service contract, given their financial state and their track record with the Northern Isles ferries and Caledonia sleepers.

"It looks to us as if CalMac is being set up for privatisation. Because both CalMac and the unions had a gun put to their heads, giving us just 6 months to reform the pension scheme, so that when that doesn't happen they can claim CalMac is not fit to run the service.
"And CalMac at the moment seems to be run by consultants on £1,400 to £1,500 a day - overruling directors on over £100,000 a year! Something's not right.
"This doesn't add up to the alleged Memorandum of Understanding between the Scottish government and the STUC!"

Send messages of solidarity to the Calmac strikers via richieventon@hotmail.com and I will send them to the workers striking back for all of us.